The following letter was submitted May 5th, 2020 in response to Champaign City Council’s proposal (and ultimate passage of) to extend the Emergency Order originally passed March 13th, 2020 to again implore restraint in government authority.

My name is Russ Clark and I am the chair of the Champaign County Libertarian Party.  Our members are concerned that another month has gone by without any changes to Ordinance 2020-022. I would hope council members are concerned as well.  It is time yet again for the Mayor and unelected city officials to be granted the power to impose a curfew, ban the sale of liquor, wine, beer, gasoline, firearms, and ammunition, as well as cut off a citizen’s utilities, ban entry or exit from the city, take possession and title of a citizen’s personal property without compensation.  The regular study session on April 28th was cancelled without discussion.  This would have provided the perfect opportunity to craft and amend this ordinance to provide for the safe operation of the city during this public health emergency.

I ask yet again for the council tonight to vote down this ordinance extension and direct the city manager to write amendments striking the unconstitutional powers granted under it. It is not necessary for a municipal government to take powers not granted or authorized by either the Federal or State constitution.  There is no impending destruction of the city nor have our medical facilities been overrun with COVID-19 cases.  If the ordinance is not extended, the ordinance 2020-039 for overtime and other COVID-19 costs would need to be continued.  An agenda amendment could be added to approve funding to pay overtime costs for police, fire, and city employees if necessary.

The city has encouraged people to wear masks but it has not proposed nor passed any resolutions pressing the State of Illinois to reopen the economy.  Many citizens would happily wear a mask if it meant they could get a haircut, shop for clothing at Marketplace Mall, workout in a gym or play with their child at our playgrounds. Council has not requested for such a quid pro quo, at least publicly, but has deemed fit to seize unconstitutional powers to take from the people with only promises to never use it.

Leaving this ordinance unchanged will leave the door open for future councils and future mayors to overreach and take drastic unnecessary measures.  I would encourage any new emergency ordinance to have clear delineations for authority and allow council to amend it prior to implementation.  Routing bills through the city administration is perfectly acceptable for zoning amendments, not for the restriction of civil rights.  Council should be allowed to amend emergency ordinances at the emergency meeting, not wait for a study session which could be cancelled out-of-hand.

I, on behalf of the Libertarian Party, ask that this council sees fit to vote down this ordinance and request amendments so that a LAWFUL emergency order can be passed at the next city council meeting. 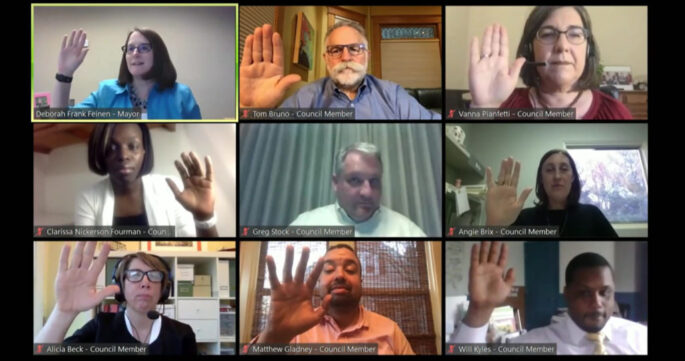 My name is Russ Clark and am the chair of the Champaign County Libertarian Party.  I am yet again shocked and dismayed that my city council is ruled by fear.  Yet another motion for emergency orders that allows our mayor and unelected city officials to ban the sale of liquor, wine, beer, gasoline, firearms, ammunition, as well as cut off a citizen’s utilities, ban entry or exit from the city, take possession and title of a citizen’s personal property without compensation.  This emergency ordinance needs amendment so city government only takes the actions necessary to deal with a public health crisis, not invasion by a foreign power marching down Neil Street. If there is no need or desire to use them, why take them at all?  We all know the names of leaders who assume these kinds of powers under the guise of an emergency only to later use them when it suits their own ends. We call them many names that we all know.

So I implore the council tonight to vote down this ordinance and direct the city manager to write amendments striking the unconstitutional powers granted under it. The council appears to trust the Mayor. Many in her political party have publicly stated she would never take such rash actions. We cannot be assured that future councils can be worthy of trust nor future mayors would be so inclined to not use them. To leave this emergency order as is would invite lesser people to use their guile and political skill to gain these powers with a populace unable to halt them. The people would be forced to rely on County, State and Federal courts or force to rein them in.  How much damage can be done to our community while we wait for a judge to dither, hear arguments and ruminate on a decision?  If a mayor were to cut off natural gas supplies in winter to halt carbon dioxide emissions under a “climate emergency” declaration, quite a bit!

This ordinance has no delineation for the state of emergency nor does Council’s procedure allow Council to make amendments prior to adoption.  They must be routed through city administration first. This is acceptable for zoning ordinances and personnel policies, not enacting police powers that trample individual freedoms guaranteed by Federal law.

I would hope that this council sees fit to vote down this order and request amendments so that a lawful emergency order can be passed at the next city council meeting.

After deadlock on the Environment and Land Use Committee, zoning ordinances for marijuana-related businesses in unincorporated areas of Champaign County are going to the board for vote. Proponents laud the potential tax windfall from potential businesses, while opponents fear children will be tempted to use the drug.

Lets consider the facts. Illinois legalized recreational marijuana earlier this year. The Champaign Board voted to tax marijuana-related businesses. Selling marijuana to minors will continue to be illegal. Even if marijuana sale is disallowed in these communities, citizens will be able to purchase marijuana elsewhere; Champaign and Urbana are only a short drives away.

Fear from opponents are purely unfounded. Legalization of marijuana has not increased use among young people or decreased graduation/dropout rates in Colorado. Use by teens in Washington state is also decreasing or remains flat. Scientific studies show that legalizing medical and recreational marijuana use is decreasing or having no affect on teen marijuana use. This tired old trope is played out.

The Champaign County Libertarian Party supports the right of people to choose for themselves what to do with their bodies. We support businesses and markets and the consensual exchange of goods. In light of evidence against increase youth usage in case studies around the US, we see no downside to allowing marijuana businesses. For these reasons, the Champaign County Libertarian Party urges board members to vote in support of pro-marijuana zoning ordinances.